Incoming Speaker Boehner recently vowed to tighten the House of Representative’s collective belt through a 5 percent budget reduction. Congressional staff are the most likely target. An in-depth look at Congressional staff employment trends raises questions about whether Congress has the support necessary to do its job. After reviewing a quarter century of staff salary and retention data, we found:

Who is picking up the slack? One clue could lie in the nearly 12,500 federally registered lobbyists, and countless others, who provide information and exert influence in the halls of Congress; by contrast there’s around 7–8,000 House personal office, leadership, and committee staff. Put a different way, $2.6 billion was spent on lobbying in Washington in 2010, versus $1.37 billion for the House of Representatives in FY 2010. Have we privatized Congress?

Our analysis found a pay gap between Washington-based House personal office staff and their DC-area counterparts. That gap may encourage staff to seek greener pastures while depriving Congress of experience and expertise. The gap is widest at the top. For example, a chief of staff on average would earn 40% more in the private sector than on Capitol Hill. See the chart below.

This comparison may still underestimate the market value of Capitol Hill staff. They are in a unique position compared with other people performing similar roles. With a competitive and thriving market for former hill talent, market forces and difficult working conditions have likely pushed many talented people into the arms of the private sector. Indeed, the average age of a DC-based House personal office staffer is 31. Ex-staffers who become lobbyists can increase their earnings by many multiples, a value derived from their Congressional employment. There are countless illustrations of the revolving door at work. 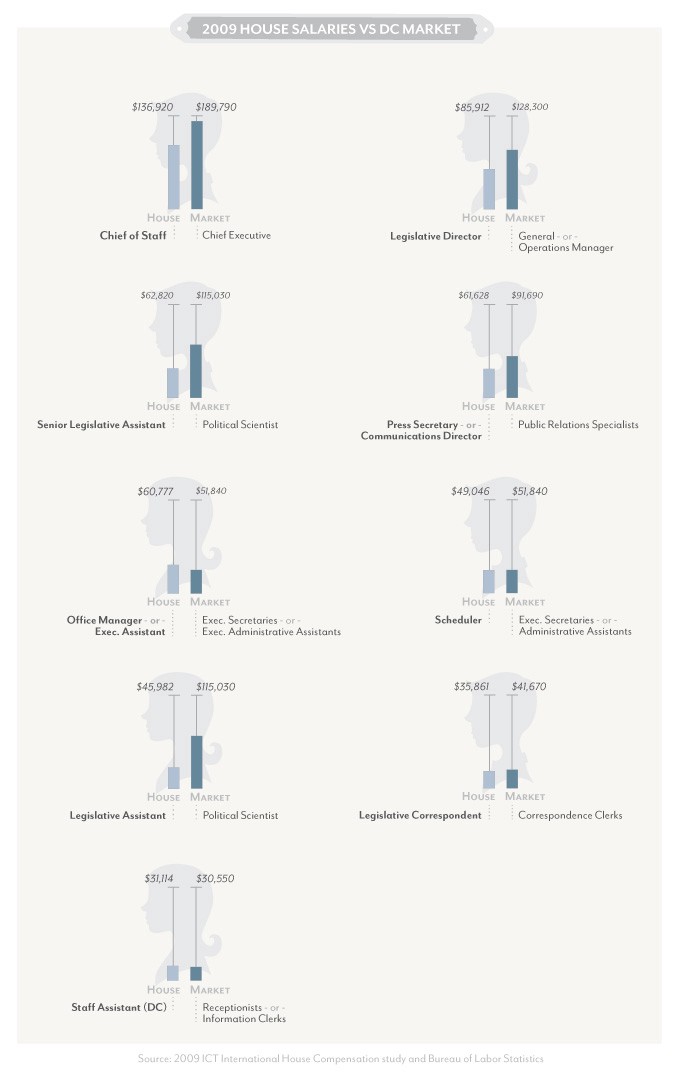 Unfortunately, our comparison between Congressional and private sector pay is incomplete. We are unable to evaluate House committee staff salaries. We didn’t look at the Senate in detail. The personal office salaries are aggregate averages drawn from a 2009 survey [PDF] performed by ICT International for the Chief Administrative Officer of the House; we only have access to the report, not the underlying data. The job titles in the House are only roughly comparable to the occupational employment and wage estimates for the District of Columbia drawn from the Department of Labor’s Bureau of Labor Statistics [FTP]. (There’s no clear fitting private sector analog to Legislative Assistant in the Bureau of Labor Statistics database.) We have no good way of comparing employment benefits. And the profile for hill staff both in age and education likely varies significantly from the DC metropolitan area.

Even so, the pay gap is clear.

We also found that there are fewer House staff and fewer legislative support agency personnel now than at any time in the recent past, with data going back to 1979. (The data is drawn from the publication Vital Statistics for Congress 2008, which covers 1979 to 2005, and was supplemented by several CRS reports.)

Altogether, House personal office, committee, and leadership staff numbers are at 87% of their 1979 levels. Much of the reduction took place in 1994–1995, when the Republican party regained control of the House. Over the last three decades, committee staff took the biggest hit, dropping from 2,027 staff in 1979 to 1,272 in 2005. See the chart below.

Major legislative support agencies show an even more dramatic downward trend, staffed at 65% of their 1979 levels. The Government Accountability Office suffered the greatest decline to 60% of its 1979 level, a reduction of 2,112 staff. CRS is at 80% of its 1979 staffing levels.

Some of the work being performed by government employees likely has been taken over by lobbyists and think tanks, at least in part. Unfortunately, reliable data is not available for the number of lobbyists prior to 1996, and we haven’t uncovered data on think tank staff. Even with this privatization of public work, assuming that’s what’s happening, it’s likely that much congressional activity — conducting oversight, evaluating proposals brought to the hill — cannot be outsourced. To be sure, some could argue that changes in technology have made some staff redundant. Perhaps that is true, but the nature of legislative support work and the history of staff reductions strongly suggest other causes.

Our analysis strongly suggests that fewer staff perform policy-related work now than in years past. As a general rule, legislative and policymaking work is performed in Washington, while constituent services are provided in the district offices. Recent years have seen a shift towards employing more staff in the district at the expense of the DC office.

For example, in 1976, nearly three-quarters of House personal office staff were based in Washington; that decreased to one-half in 2005. In other words, the total number of staffers in Washington has decreased by 1,500 to 3,354 from 1976 to 2005. (Again, this information is drawn from the publication Vital Statistics on Congress 2008.)

We also found that most House personal office staff salary averages are unchanged over the last 20 years, adjusted for inflation, and may have even diminished over time. Consequently, staff may find that longevity brings them diminishing benefits and may prompt them to bring their skills elsewhere.

With the exception of the Chief of Staff, Legislative Director, and Scheduler, the average personal office staffer’s salary has not changed since 1990. On average, a staffer in 2009 likely earns within a few thousand dollars of their 1990s equivalent. By contrast, a Chief of Staff’s earnings have increased by $30,000 on average; a Legislative Director’s earnings increased by $17,000; and a Scheduler earns $9,000 more.

It is possible that we underestimated the value of 1990s Hill staff earning power because we relied on the Bureau of Labor Statistics’ Consumer Price Index Inflation Calculator to transform all money into 2010 dollars. The Inflation Calculator uses national data, but Washington DC of the 1980s and 1990s is a very different place than it is today. It is now the wealthiest and most educated region in the nation, according to the Washington Post’s analysis of 2010 census data. DC in the top 25 for most the most expensive homeownership markets and top 10 for most expensive home rental markets. Additional analysis may find that many Hill staff salaries have actually decreased in real terms. Our findings are drawn from the best available information, but we cannot fully assess their accuracy. Our data is drawn from Congressional Management Foundation and ICT International surveys. We did not have access to the underlying data, but only averages and aggregate totals. The methodology and reliability of each report may vary; as may the classification of who has a particular job title. Unfortunately, the surveys do not include information on committee staff pay, or on employment benefits. Legistorm, although complete, only goes back to 2001.

Our efforts to collect House and Senate employment surveys was complicated by the House’s refusal to provide these reports upon request, their unavailability generally (including at the Library of Congress), and an incredibly small print run and restricted distribution. The Congressional Management Foundation, which ran the survey until 2004, was as helpful as they could be without breaching contractual relationships. Ultimately, we relied on fantastic librarians like James Jacobs of Stanford University, several friends on the Hill, and former intern Jessica Pearce to obtain copies of existing reports.

The foremost concern is whether Congress has the capability to effectively and impartially carry out its responsibilities. Does the decreasing number of policy staff combined with financially attractive outside employment negatively affect Congress’ legislative and oversight capabilities? Would addressing these issues have a positive effect on Congress’ ability to function? Congress looked seriously and comprehensively at related issues in 1978 in its Commission on Administrative Review (H. Doc. 95–178), chaired by David Obey. It is time for another look.

Second, for those who care about the legislative branch, Congress must do a better job of making available information about itself. It was nearly impossible to obtain copies of staff salary surveys. Not until this past year were House Expenditure Reports, which include staff pay, made available online, and they’re in a terrible format that is difficult to evaluate. The Senate won’t begin publishing comparable data online until the 3rd quarter of 2011. The publication Vital Statistics on Congress 2008 is incredibly useful, but was compiled by private researchers. Again, Congress should make this information available online in formats that lend themselves to easy analysis.

Third, there is too little information about lobbyist pay, lobbying, and the effect of the revolving door. More research is needed; we also need better tracking of these activities.

Fourth, this analysis is separate from the ongoing debate over executive branch salaries.

Finally, we identify a number of useful questions, but our analysis is necessarily limited. Addressing the incentives that affect how staffers gain expertise and evaluate policy choices — even if incompletely — is worth additional attention. To that end, we are making available all of the data we used, except when we are not permitted to do so for copyright reasons. (See staff salary data [XLS] and House vital statistics [XLS].) Please let us know what you think.

Disclosure: I formerly worked as a hill staffer and for a legislative support agency.